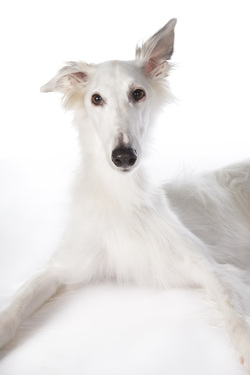 Photo by I-5 Publishing
Aiden, Azure’s littermate, was also born and raised at Kristull Ranch, in Bowling Green,
KY.  He is very quiet and unassuming.  He asks for so little.  He loves his food and is
easy to train.  He is always your bright white shadow.  A bark from him is a very rare
occurrence.  Aiden is spending time with his co-owner Pamala in North Carolina where
he has become the highest titled Silken Windhound in rally obedience, and holds the
highest titles of rally in AKC, UKC and ADPT.  He also holds obedience titles from UKC
and AKC.

Aiden is the carbon copy of his father Kristull Unbreakable.  Aiden's tail is soooo long
it lies several inches on the ground at rest but he carries it enough off the ground when in
motion so it stays white.  He romps and plays joyously.  A roll in the grass on his back
must be near the top of his list of favorite things in life!

March 16, 2013, at the Sun Ray Classic, Aiden became the first Silken to earn an
Altered Best in Show in ARBA & Kennel Club, USA.

Aiden is now an Altered Champion in three kennel clubs.

Aiden started competing in Rally Obedience on April 13, 2013 and earned two qualifying
legs toward his RN. Scores of 186 & 193 (200 is a perfect score).  He tied for 3rd place with his score of 193, but his time was
faster so came away with a 3rd placement! On August 4th, Aiden earned his rally title with a 3rd leg score of 194, which also
gave him the High in Trial Other Breeds! 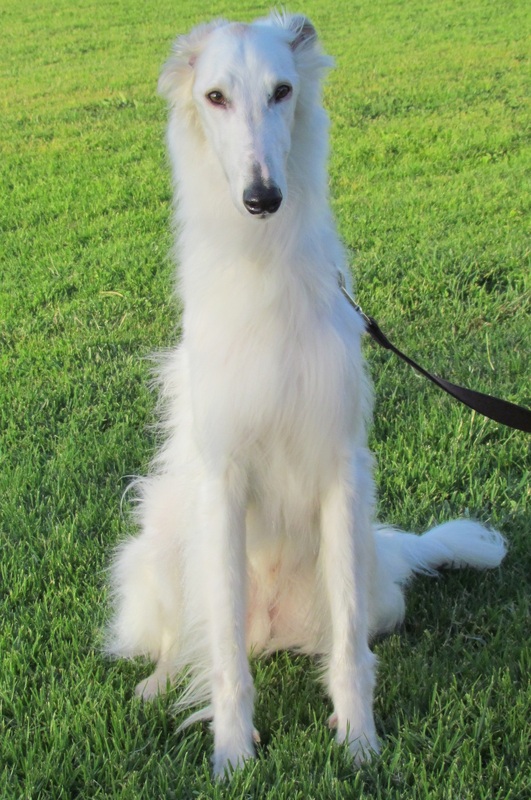 Aiden is also our webmaster.  Here he is burning the midnight oil updating Dior's page: 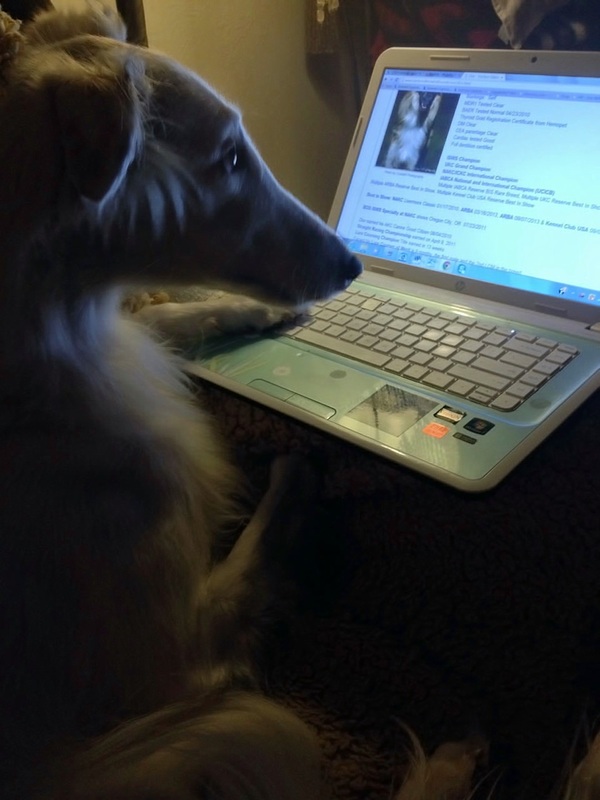 Aiden is on a co-ownership and is Pamala's special boy.  Click on the photos to see them larger. 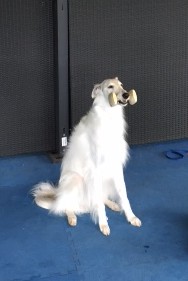 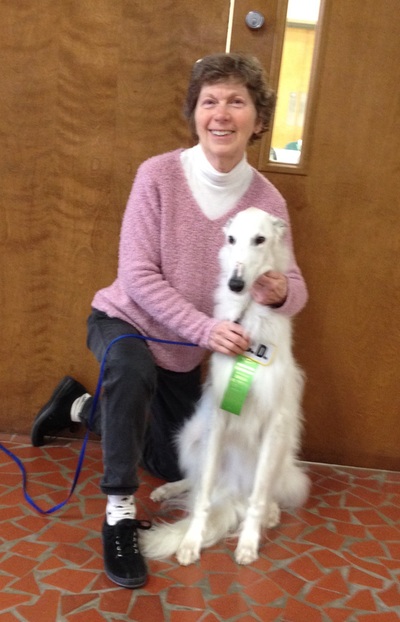 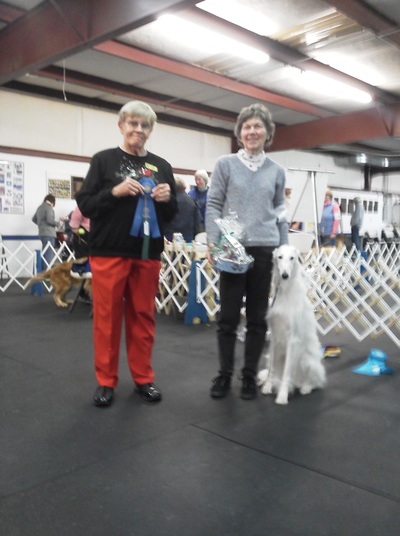 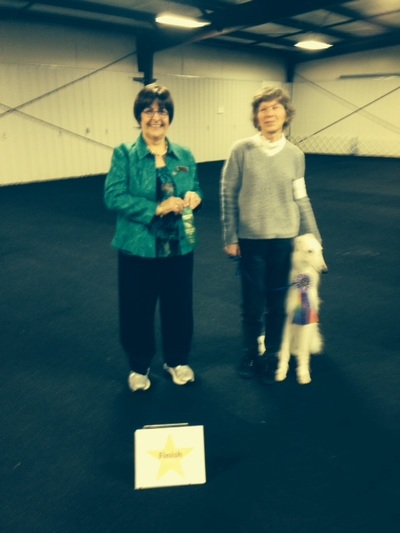 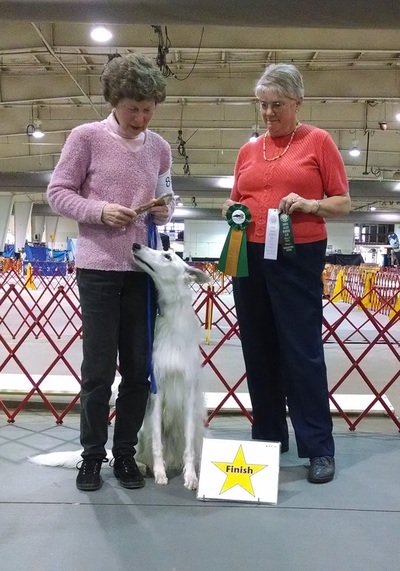 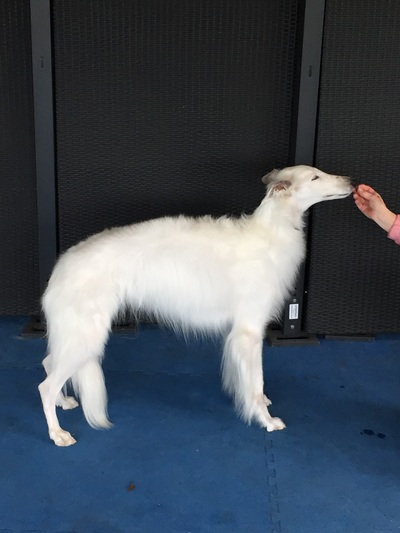 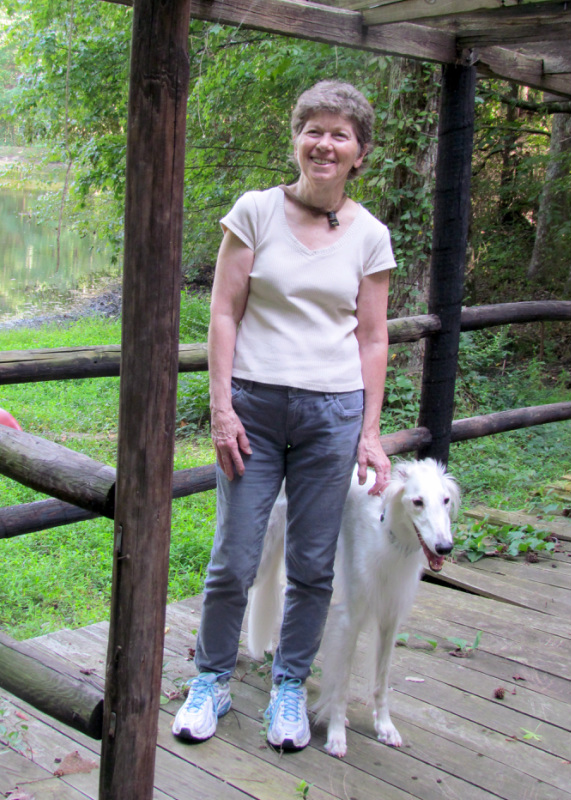 Above Aiden with Pamala at Don & Hutsie's Siendo Farm and below lakeside at Siendo. 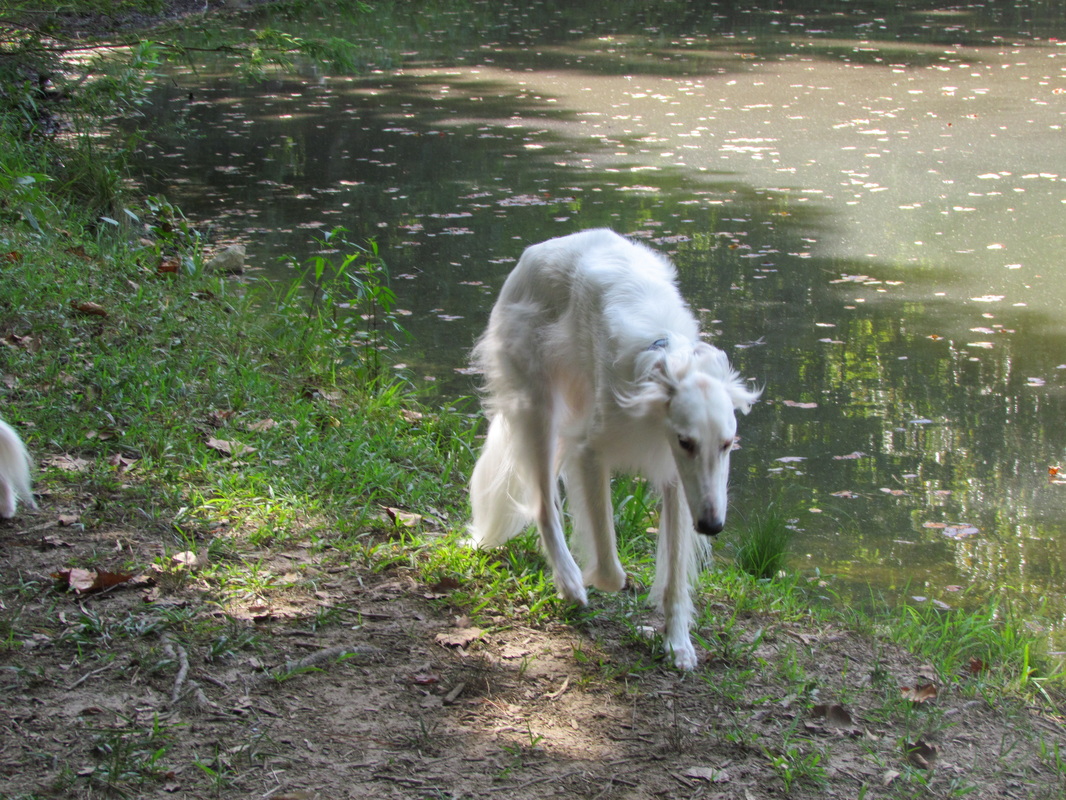 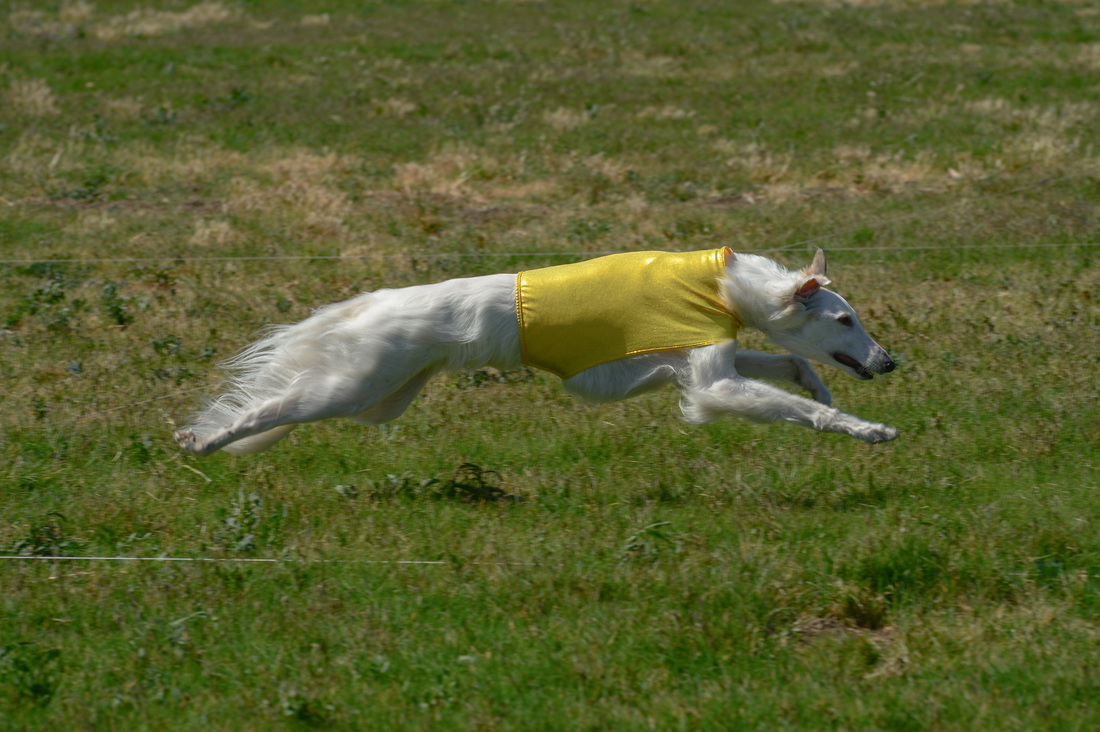 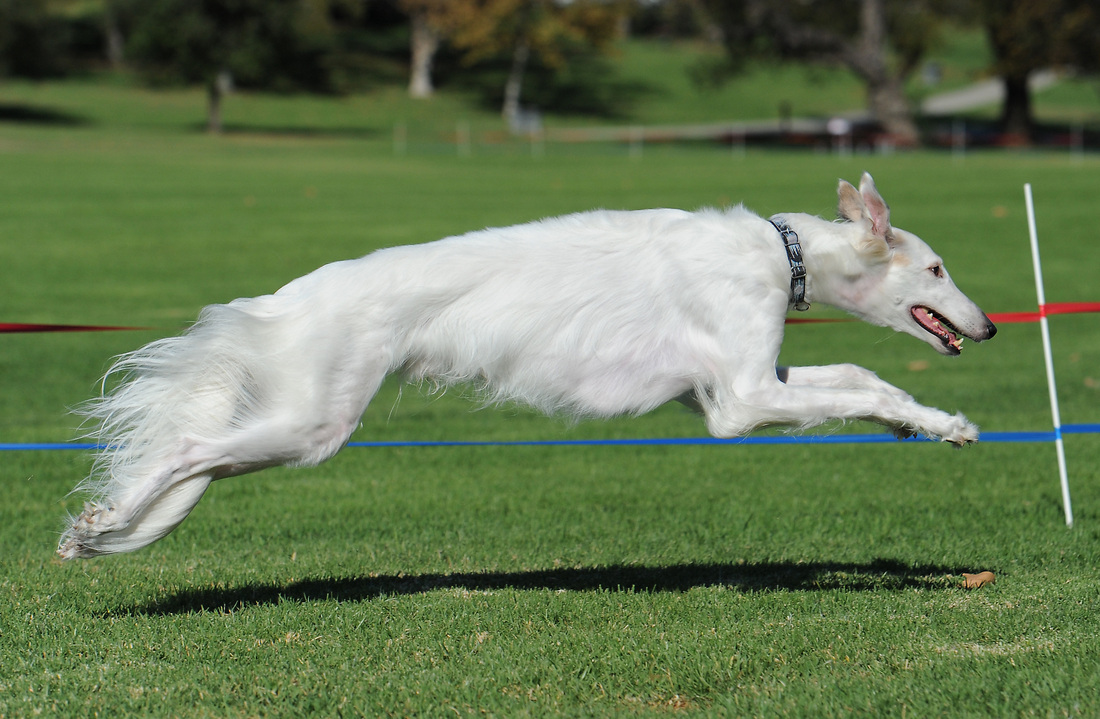 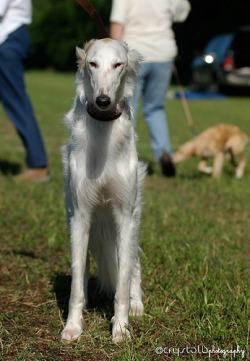 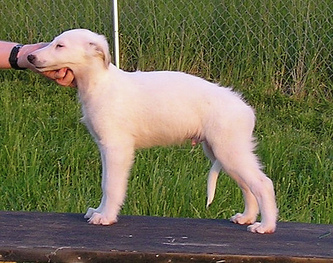 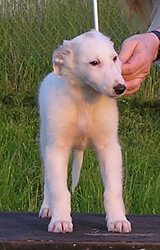 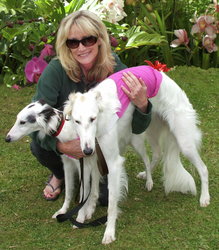 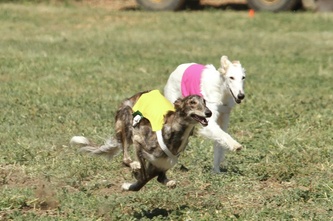 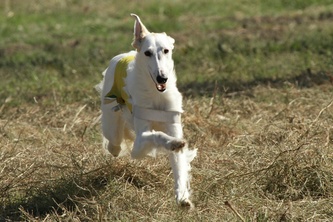 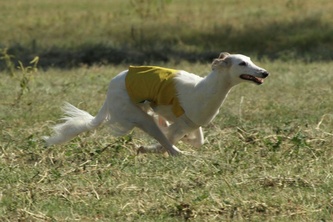 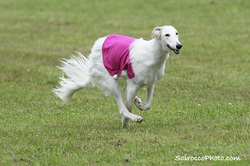 Aiden & Penny lounging.....photo by Nancy Hicks
The video below is of Aiden and Dove competing in the NW Fest 2010 Flight B lure coursing final.
Aiden is a first time entry and Dove places second after a three-dog run-off.