Starfyre Silken Windhounds
elegant athleticism
We breed for the coursing field and the show ring
with an emphasis on performance and intelligence.
​ 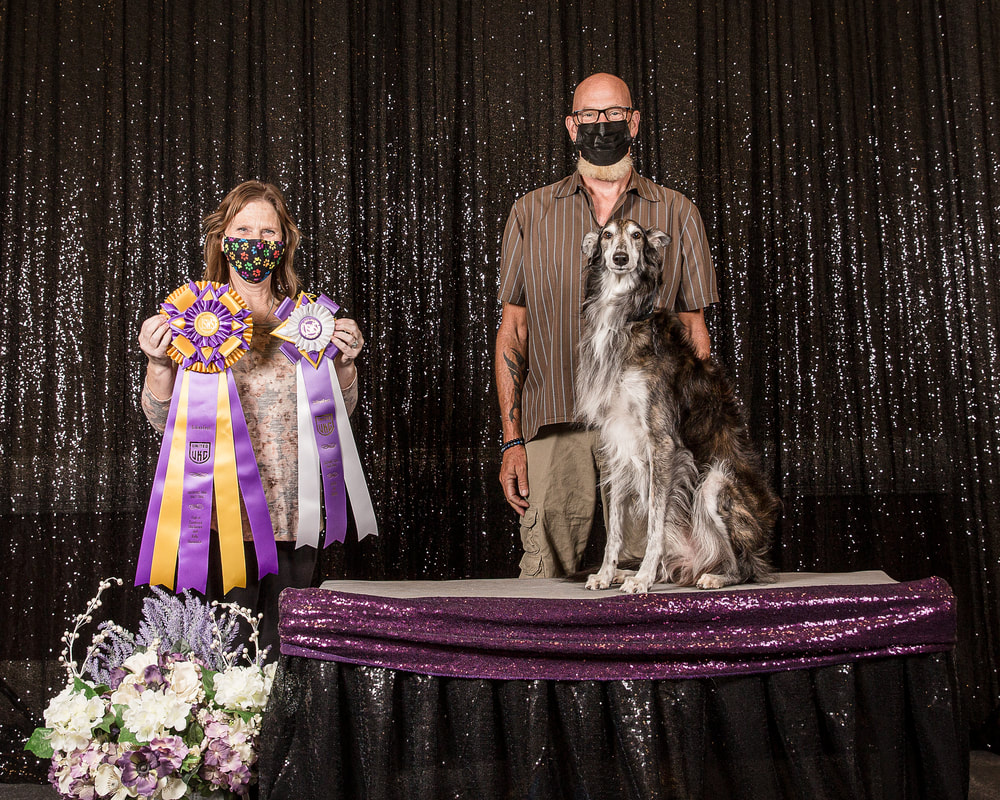 Judge Terri Kaluza, Keith & Khan.
Judge Cindi Gredys awards Sonnet Best in Show at the 2019
Silken Windhound National Specialty (SilkenFest)! Handled by owner/breeder Keith Hicks.
​Photo by Emily Buerger.
Sonnet is an ISWS Champion, as are both of her parents and all four of her grandparents. 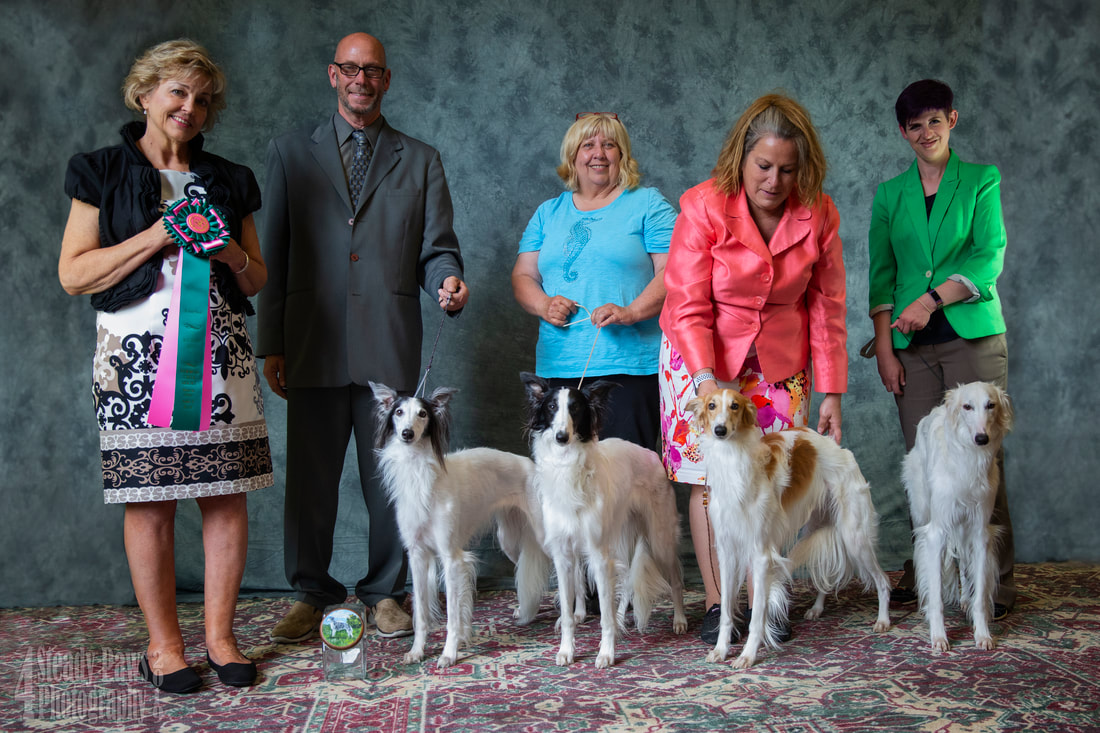 Judge Cindi Gredys looks on at Sonnet with her get (Sonnet with Keith, daughter Kenai with Karen Sanders, son Harley with Gwen Little and son Joker with Ashley Caskey). 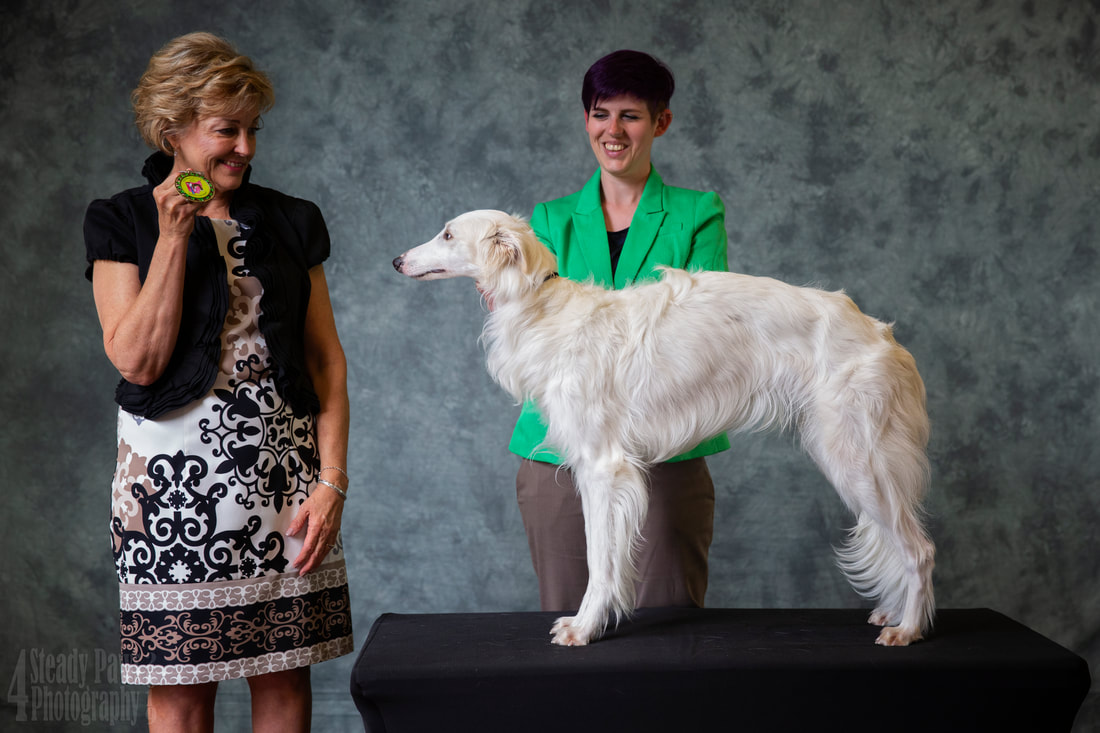 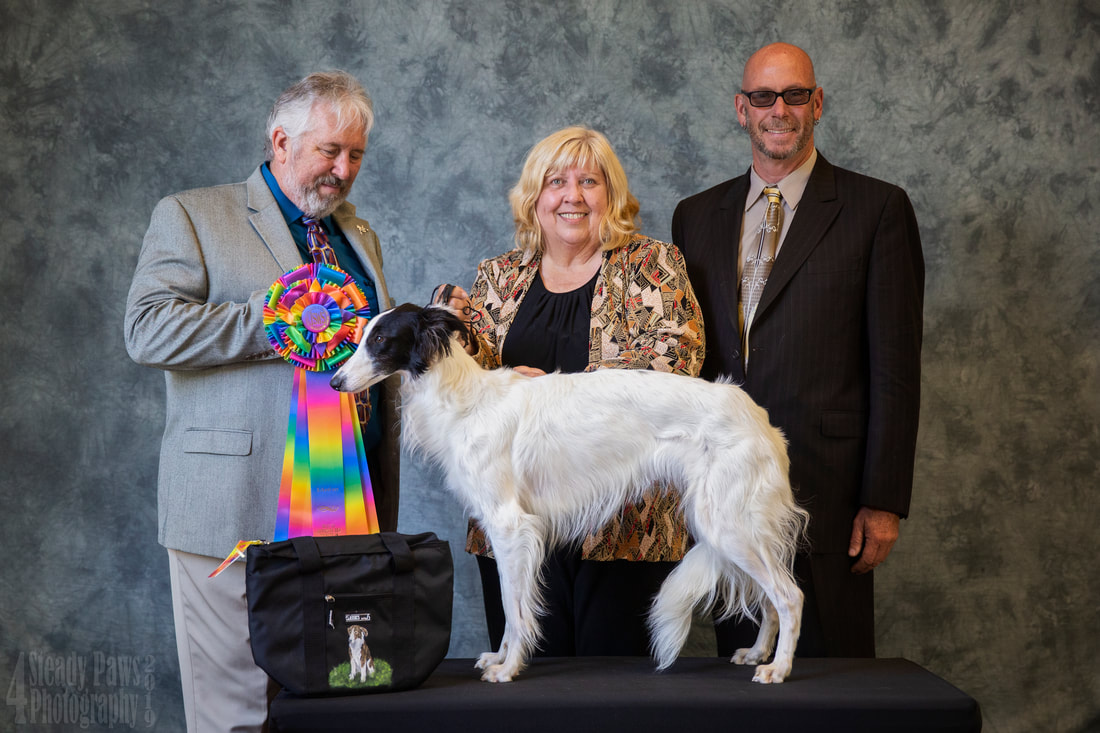 Judge David Arthur awards “Kenai” Starfyre Whimsical @ Allagante Best Opposite Sex in Puppy Sweepstakes. Kenai is handled by her owner Karen Sanders and was bred by us (Keith in photo w/ Karen). 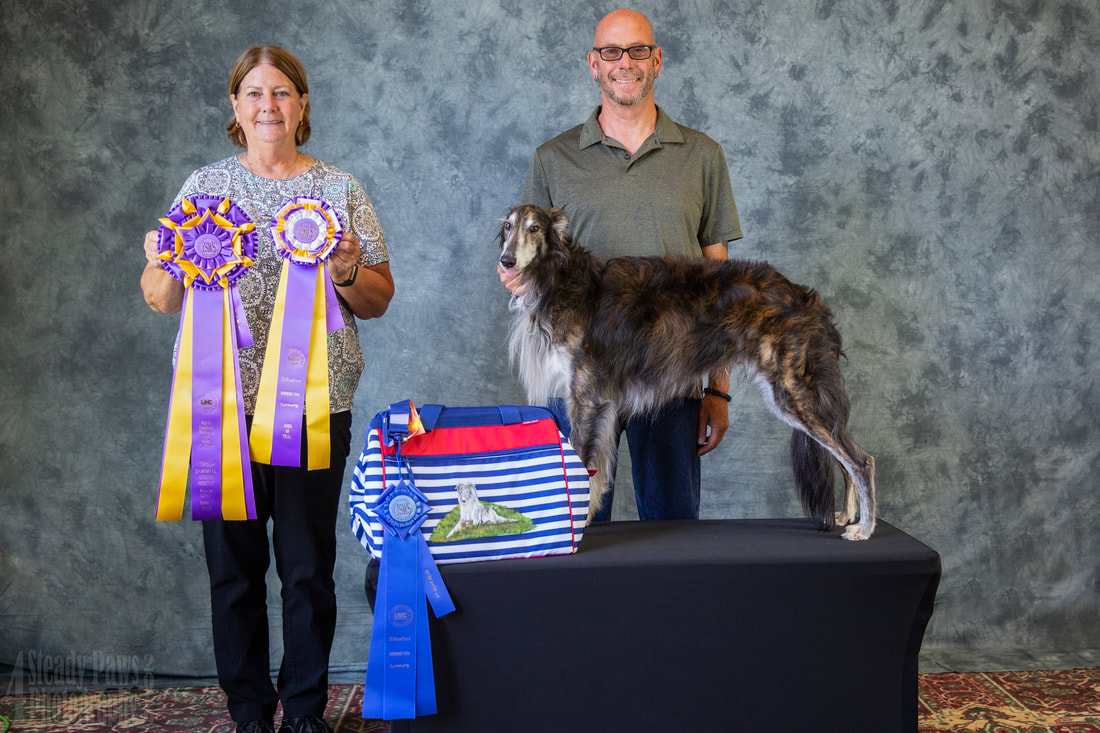 “Khan” Starfyre Gold Zircon earned High in Trial in obedience at our National Specialty on June 7th under Judge Kathleen Cook and earned a special high in combined for scoring the highest in both obedience and in rally-obedience level 2 (off leash). Handled by Keith Hicks. Khan & his sister Opa! also won the Best Brace class at the nationals under Judge Cindy Gredys. Photo by Emily Buerger. 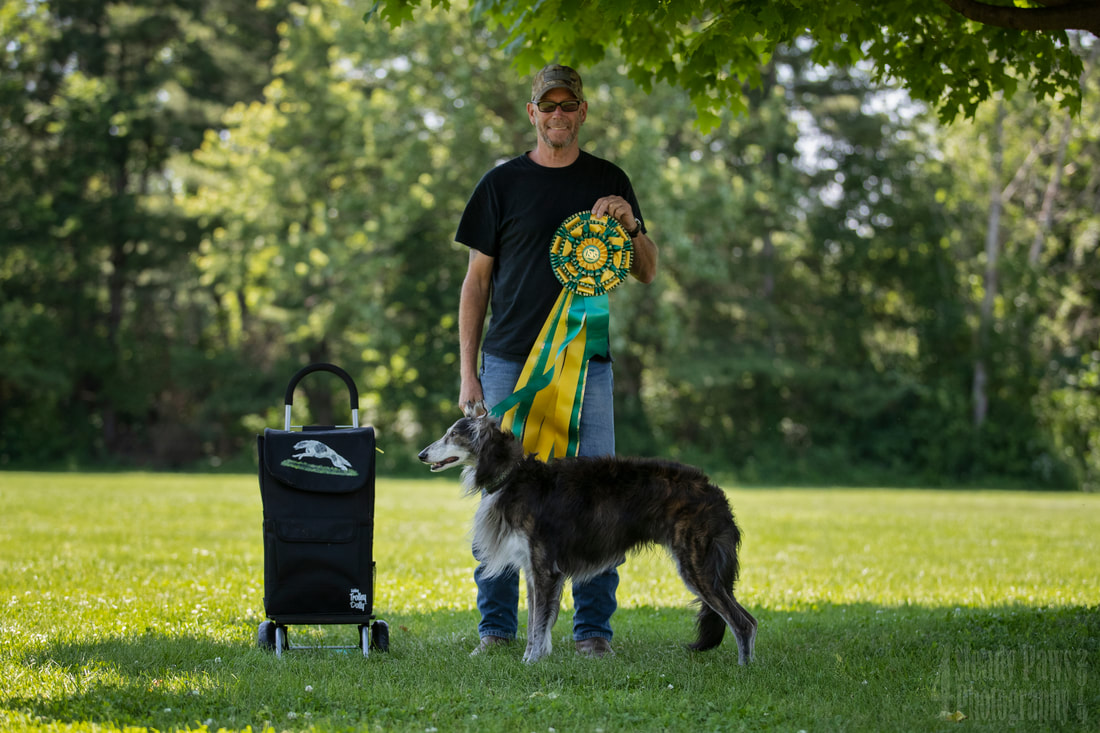 Khan won the pentathlon for the 3rd consecutive year. The pen is the best accumulative score over 5 events; you can enter 6 and take the best score of 5. 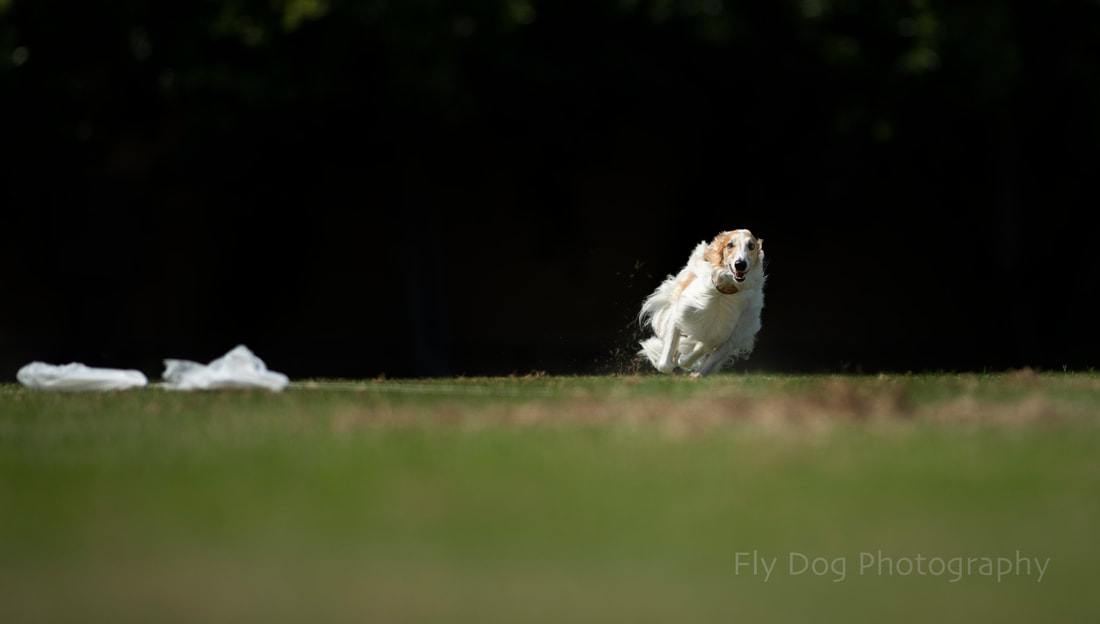 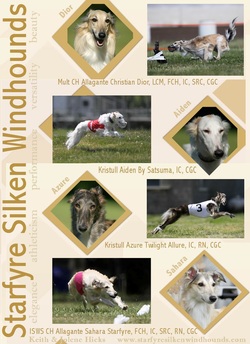 Starfyre Silkens consists of a family of Silken Windhounds in Southern California.

Dior is the head of the household and presides over his pack with great efficiency.
He is a multiple conformation Champion, UKC, ARBA & Kennel Club USA
Grand Champion, Multiple BIS winner, straight racing champion and an
ISWS Lure Courser of Merit 3 (FIRST LCM2 and FIRST AND ONLY LCM3
in the breed).  After the first 100 pts and placements for a field championship
are attained, a lure courser of merit is earned with 300 more points and at least
four first placements.  Dior has done that three times!  Dior is also the first and
only Expert Courser 3 which is the equivalent of the AKC's Master Courser 3.
Each EC title is 50 courses with qualifying scores after the Intermediate Courser
title is earned.

Dior is the #1 Lifetime lure coursing Silken Windhound of all time in the breed
and #1 Lifetime Silken for the past six years in ASFA.  He is a therapy dog.
Dior's daughter, Sahara (also a therapy dog), has been on the top 20 Lifetime list
for the past 4 years as well and she has been the #1 lure coursing Silken female
in ASFA and the highest scoring female both days at the 2012 ASFA International
Invitational. In racing for 2011-2014, Sahara was the #2 or #3 girl in those years.

Sahara is an ARBA Supreme Grand Champion, UKC Grand Champion & ISWS Champion as well as being an ISWS Lure
Courser of Merit and an ASFA lure coursing Field Champion and ISWS Straight Racing Champion Excellent/LGRA Supreme
Gazehound Racing Champion.  Azure was the first Silken to earn a Rally Obedience Championship, Sahara the second.
Azure is a UKC conformation Ch and an ISWS/ASFA Lure Coursing Champion & Expert Courser and is pointed in straight
racing and has earned an agility title.

In lure coursing, ISWS acknowledges Expert Courser titles, which are double what an AKC Master Courser requires. Dior
is an Expert Courser 3, Sahara, Khan & Smoky are Expert Courser 2 recipents and Azure an Expert Courser.  An Expert
Courser is 50 courses with qualifying scores. Only a handful of Silkens have earned this title. Dior & Sahara are therapy dogs
with the Animal Health Foundation (Delta Society/      Pet Partners affiliate group).  Please visit their pages to find out more
​      about them.

To find out more about the Animal Health Foundation, please visit their website:   www.animalhealthfoundation.net

Dior wins Best in Show!
November 18, 2019 Dior wins BoB & Group 1 in both shows
and then is awarded BIS under Judge Susan Nikkel. 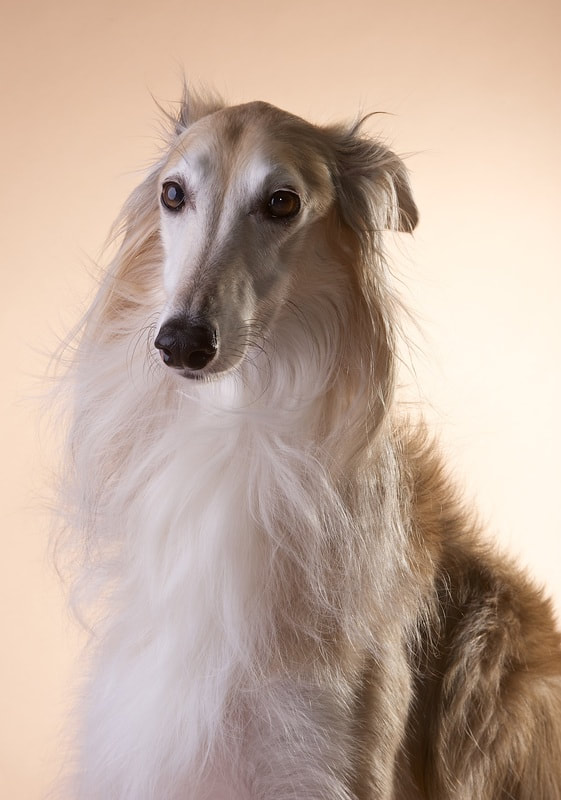 Starfyre is home to the #1 Lifetime Lure Coursing Silken Windound - Dior
For the 8th year in a row (2010-2017), Dior is the #1 Lifetime Lure Courser with 400 dogs defeated and 1,116 points earned in ASFA!
Dior is the first and only ISWS Lure Courser of Merit 3,
the first and only ISWS Expert Courser 3
and the leading Silken Windhound sire of lure coursing field champions. 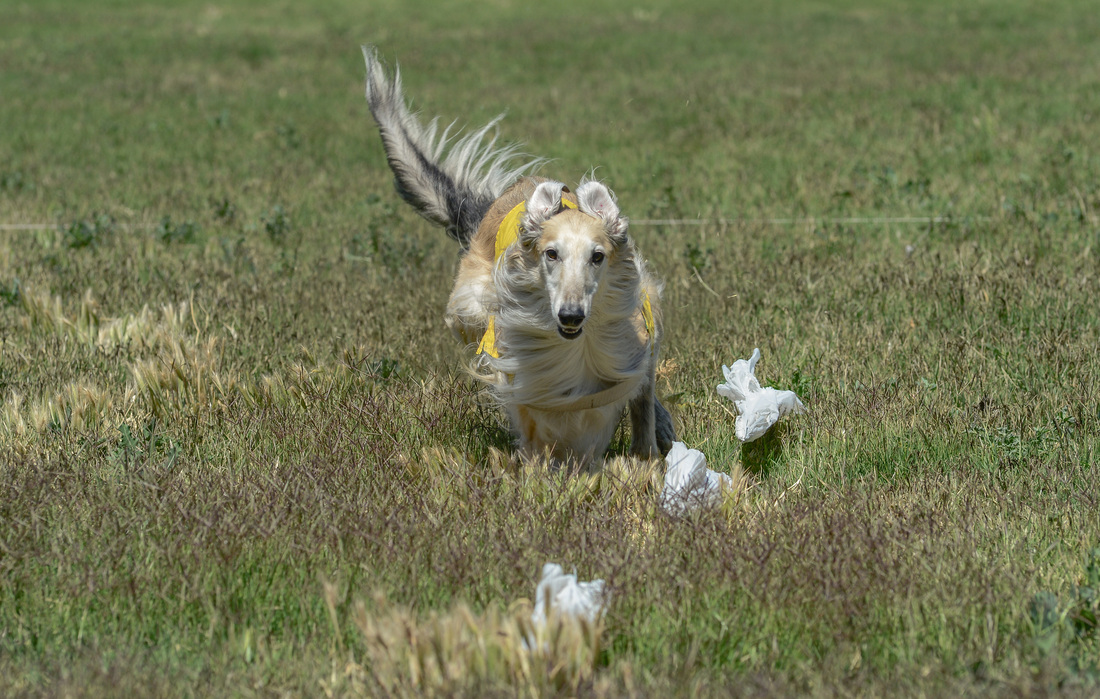 Khan (Starfyre Gold Zircon) follows in his daddy Dior's pawsteps!
Khan won the three day continuum competition over the 2014 Thanksgiving weekend, the 39th running of the Turkey Run.  Dogs must compete all three days to be eligible and the highest scoring dog in each breed is declared the breed winner and lure courses against all the other breed qualifiers for the title
of Best of the Best.  Dior won the event in 2010, the last year it was a four day event.
We believe they are the only father and son to have both won this prestigious honor.
There were four judges judging the Best of the Best competition.
Khan also represented Silkens in the 2015 continuum competition of the Turkey Run.
We are pictured below with Khan, he is wearing his Best of the Best sash, Keith's sister, Jennifer (field trial secretary of the event) is presenting the trophy and Judge Dixie Hirsch is holding Khan's qualifying ribbon.  Khan won the stuffed turkey and the chair. 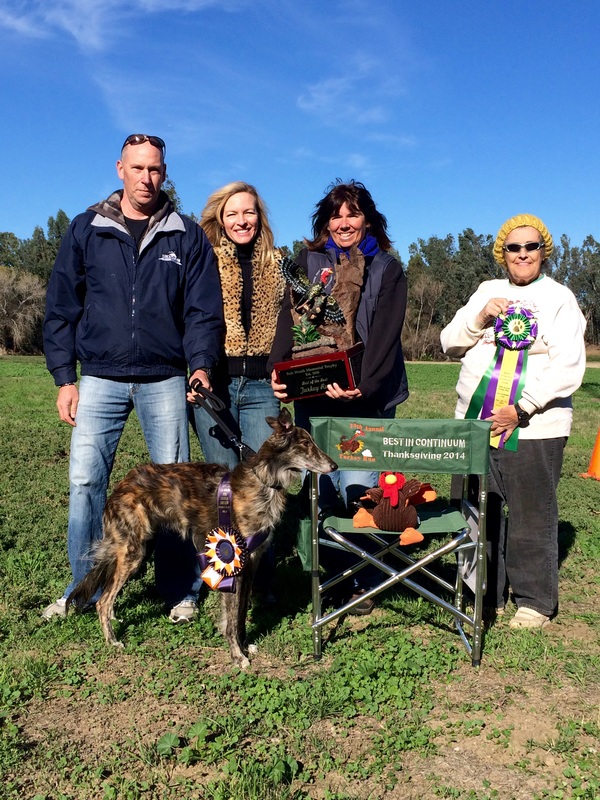 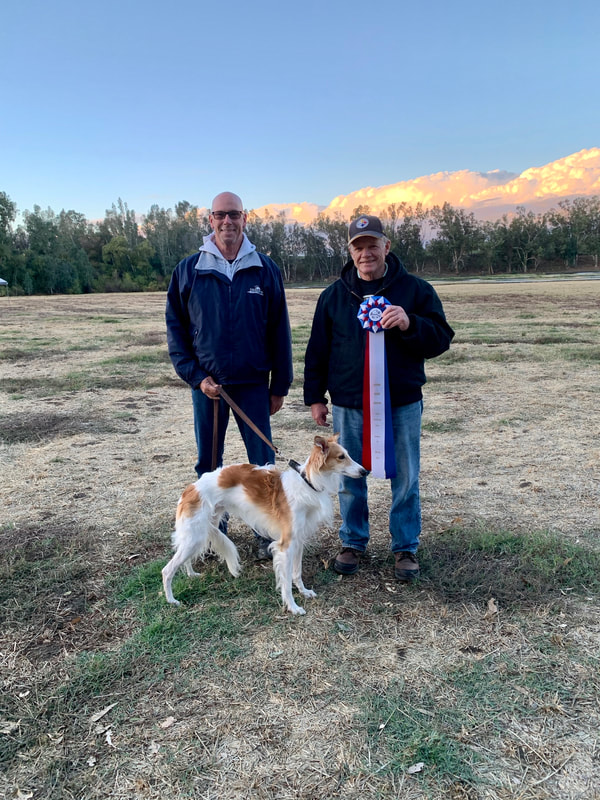 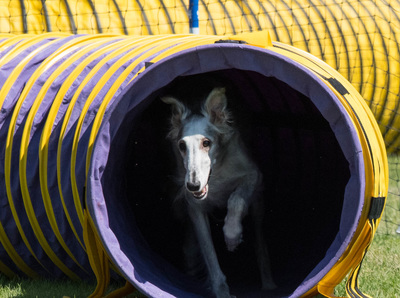 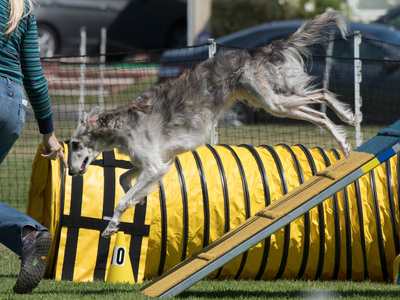 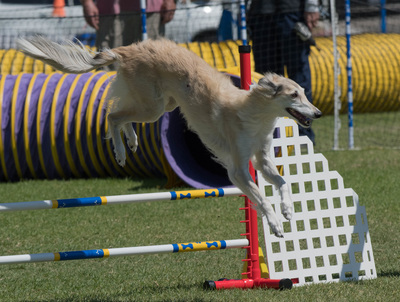 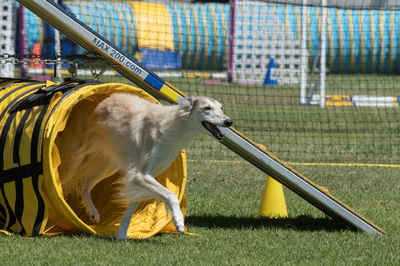 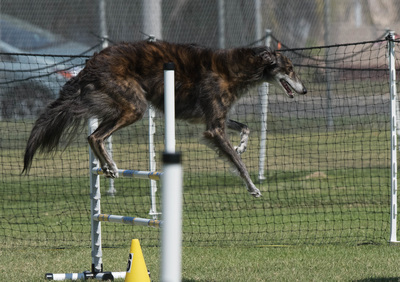 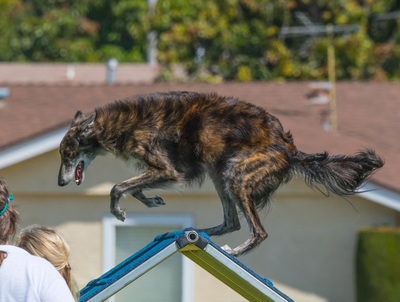 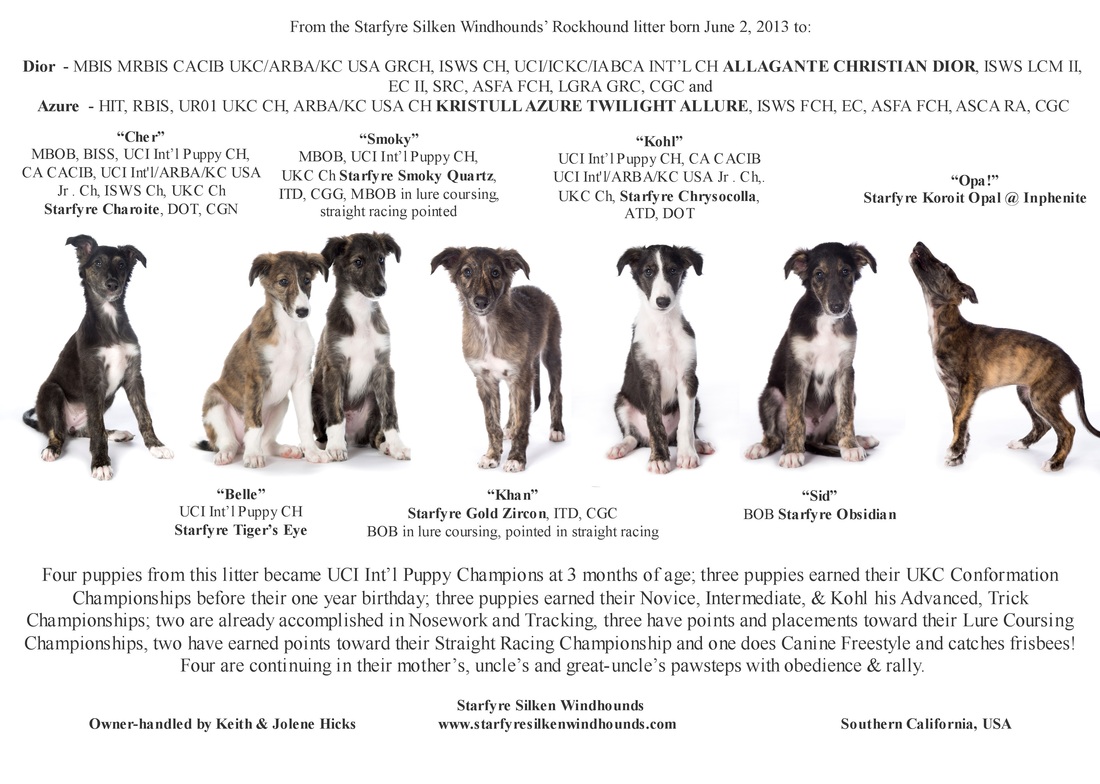 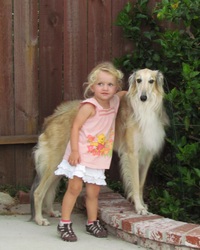 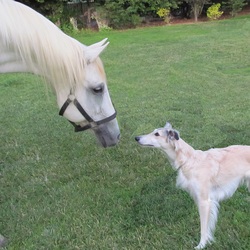 Dior wins the inaugural 2013 So Cal Cup lure coursing Invitational.  Similar to the World Winners at the FCI show, Dior now adds the prefix SFC13 to his name.  Dior also represented Silkens as the breed qualifier to the 2014 So Cal Cup.

Winner against all breeds, Dior, pictured center with his trophy and the other fantastic Best of Breed finalists for the 2013 lure coursing So Cal Cup. 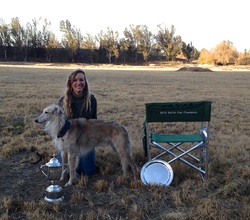 To be invited, the hound must have earned a qualifying score in 8 pre-designated trials during the year.  Of the dogs having achieved this, those with the three highest scores were extended an invitation.  The course was nearly 900 yards and a fantastic layout with everything to ensure the hounds were well challenged.
Before the pre-lims all hounds that had qualified were given the ribbons you see pictured above with their name and title on one of the streamers of the ribbon. They were also given an embroidered keepsake with their breed pictured.  After the pre-lims and finals all of the BOB hounds were given the silver plates pictured with the So Cal Coursing logo, their breed and the event and date engraved.  Then they had a catered lunch by Olive Garden for all in attendance.  There were four Best in Field courses and Dior put in impressive runs all day, the BIF was no exception.  This was his day and all four judges determined him to be the winner.  Dior earned the embroidered chair and silver perpetual trophy in the above photo.  In the small photo you can see part of the field and the mound which they coursed around as part of their follow and agility points. 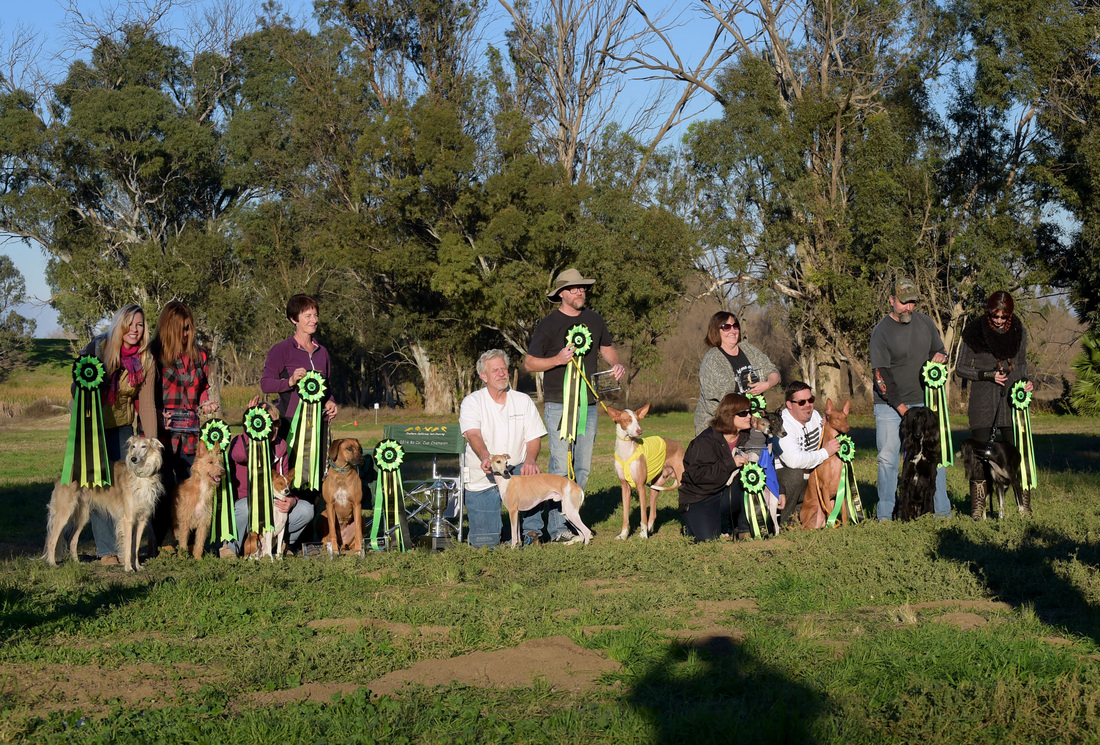 Here is the course from SoCal Cup 2013 as puppy Smoky, Dior's son, had a practice upon it after the finals but before Best In Field:

Sunday Dior also became THE FIRST SILKEN WINDHOUND TO REACH LURE COURSER OF MERIT II - which means that he has earned 700 points and at least 9 first placements (he has 18) in the required parameters.

A slideshow from the 2012 American Sighthound Field Association International Invitational is below: 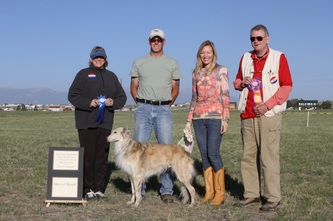 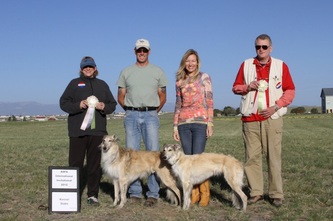 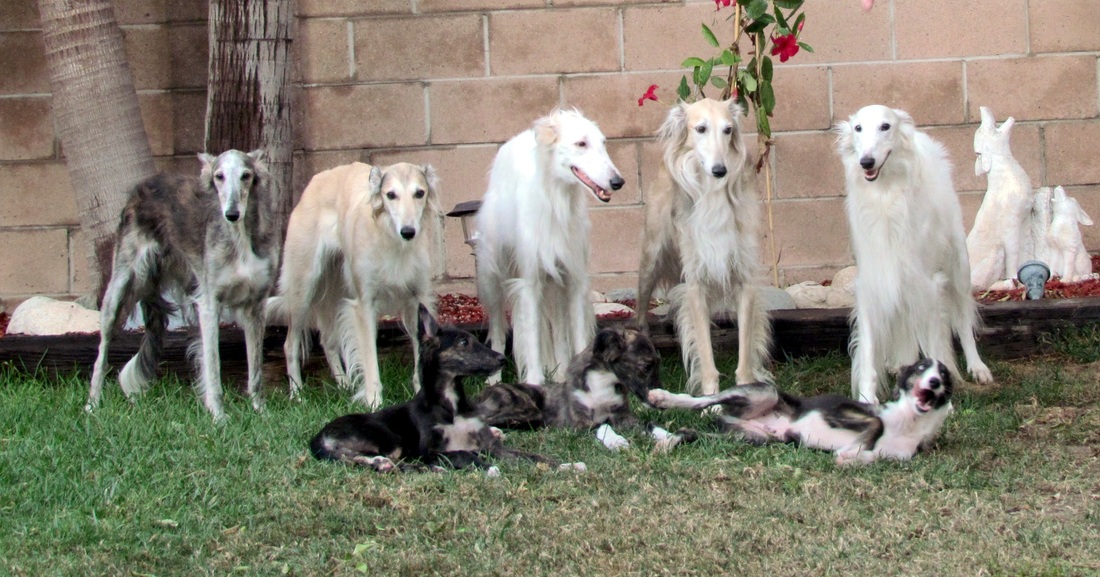 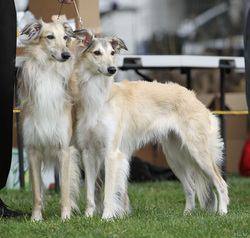 Dior and Sahara Best Brace 2011 Nationals by Dave Mills
Silken Windhounds have the distinction of being America’s first Sighthound.  The
breed was developed in Texas, USA by our founder and champion Francie Stull
of Kristull Ranch.

This gracefull, elegant breed was bred to be a medium-sized Sighthound to hunt
smaller game but they are also perfect as a pet and companion.  They are very playful
and enjoy your company.

They quickly become part of the family and will "help" you with whatever you
are doing...even if they just supervise.

Windhounds are an extremely versatile gazehound and there are many activities to
participate in if they, and their owners, are so inclined.  Such as... 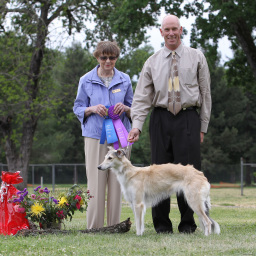 The kennel clubs under which we currently show are:

Silken Windhounds are built for speed and many enjoy performance events such as:

Straight Racing – hosted by ISWS at specialties or in conjuction with local LGRA or Whippet clubs.  A straight racing meet
consists of three 200 yard sprints down a straight, flack track, meadow or field.  Hounds run within their breed and are
grouped by ability.  Medium-sized and larger breeds race in groups of up to four, whereas smaller hound breeds may race up
to six dogs. www.LGRA.org

The smaller breeds may race less than 200 yards.  Click here for a video - http://www.youtube.com/watch?v=LvZPMacLGps

Lure Coursing – check www.asfa.org for events in your region.  A lure coursing field trial is meant to simulate the coursing of
game and to preserve and develop the coursing skills inherent in sighthounds.  A "lure" of several white plastic bags is strung on a line and pulley system, propelled by a generator.  The course is usually no less than 600 yards, but 500 yards is the minimum.

The farthest we have coursed is 1,125 yards.  The coursers are decided by random draw.  Up to three dogs course at a time,
within their breed.  First in a pre-liminary trial and then in a final.  The direction of the final is reversed.  The scores from both are
added together to determine placements.  Placements are decided by the qualities of Enthusiasm 15 pts., Follow 15 pts.,
Speed 25 pts., Agility 25 pts. and Endurance 20 pts. for a possible score of 100.  Hounds receiving the same score will have a
run-off to determine final placement and the course direction is again reversed.

Oval Racing – check www.notraracing.org for scheduled events in your area.  An oval race meet consists of 3 or 4 racing programs
at the same distance.  The length of the race is usually between 300 - 400 yards.  Hounds race within their breed.  They are
graded by their past performances in order to match racers against each other based on their racing ability.  Whippets may race up to 5 dogs per race, for other breeds, four dog races will be run.

To see an example of oval racing - http://www.youtube.com/watch?v=lJG69kiX1Xo

Agility, Obedience*, Rally-Obedience, Tracking and Utility are all activities Silken Windhounds may enjoy.  These may be
entered at UKC trials or at any All-Breed Trial held by the Australian Shepherd Club of America.  For UKC visit
www.ukcdogs.com ; or just check the event calendar at www.asca.org.  All non-Aussie breeds obtain a tracking number so
that ASCA may track points towards titles and awards.

Spayed and neutered dogs, who are structurally sound, can participate in all performance events.  Most ISWS, NAKC & IABCA shows also have a class in which altered dogs may be show:  companion class (ISWS), spay/neuter class (NAKC) & altered class (IABCA).

Our dogs were part of the Silken Genome Project and were DNA profiled with UC Davis.

Silkens Windhounds are one of the longest-lived breeds, typically living into their mid to late teens.

*ISWS has started including Obedience at its National Specialty and hopefully Regional Specialties will follow suit. 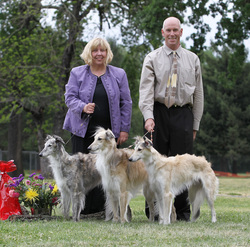